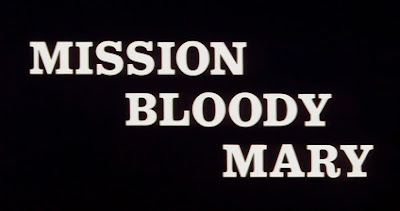 Mission Bloody Mary
Director: Sergio Grieco
Year 1965
Mission Bloody Mary is a highly entertaining Eurospy flick that stars Ken Clark as an unstoppable and extremely charismatic CIA agent named Dick Malloy aka Agent 077. In true Bond fashion, 077 must find and recover an American nuclear device that has been stolen by the dubious secret organization called the Black Lilly, before they sell the powerful weapon to the Red Chinese or it ends up in other foreign hands. The film moves at a brisk pace, only stopping once in a while, but the overall enjoyment level of this film is right up there with some of the top Eurospy flicks.
The casting of Ken Clark as super agent Dick Malloy is pure genius and he's one of the main reasons that this film is so enjoyable. His tough guy, suave routine, is spot on and the fact that he is built like a freight train doesn't take away from the overall appearance that this man can wreck some shop when put in a sticky situation. Like his agent counterpart James Bond, Dick Malloy can spout out some good one liners when the situation calls for it. In Agent 077's first mission, Mission Bloody Mary, he offers up a few choice gems, but nothing too over the top and cheesy. What helps Ken Clark's ability to sell his lines is his slick delivery, almost winking to the audience as if he's having as much fun as we are. He projects a confidence that absolutely had me sold during my first viewing of this film and quelled my fears on whether this guy could carry a Eurospy franchise and do it with style. He can and does.


Now it wouldn't be a Eurospy film without a few beautiful women to decorate it with and this one excels in that department by specializing in one particular German beauty, Helga Line, whose been in more genre films then I can keep track of. It seems she was the go to girl for most of these Eurospy films of the 60's and I've been hard at work trying to track down most of her roles, but still can't seem to find the end of her filmography in this genre. Two of my favorite horror films that she's appeared in are Horror Rises From the Tomb and The Loreley's Grasp. She was stunning in both films and in Mission Bloody Mary, she demands attention in every scene that she appears in. Her role in the film is essential in bringing about many of the intriguing moments in the film. Helga plays Dick Malloy's partner and love interest in the movie, but also provides Malloy's character with a great deal of trouble as he struggles to both bed her and figure out her allegiance. She does an amazing job as usual in both enticing and engaging the audience.


Location. Location. Location. That's what Eurospy films are all about. Though they were limited by their small budgets, most Eurospy movies relied on the location of their stories to pump up the overall look of their films and in the process made them look much more expensive then they had any right to be. In Mission Bloody Mary, we are treated with a bevy of locales from Paris to Madrid, providing a lavish look to the film and packing the frame full of stunning landscapes, beautiful coastal towns, and posh casinos all in the dynamic style of Europe 1965. With this first entry in the Dick Malloy spy adventure series, we're introduced to a world that is both beautiful and deadly, but at the same time, so damn fun.


If action is what you crave, then Ken Clark is your man. His portrayal of Dick Malloy is a physical one, throwing caution to the wind and karate chopping every last bad guy until they lay motionless at his feet. You have to commend Clark for his enthusiasm in many of these fight scenes, because you can see him throwing his whole self into it. Being a veteran of Peplum films, where the battles are fast and fierce among the italian sword and sandal epics, Clark employs that same animalistic nature in his fight scenes, lashing out at his attackers like a cornered animal. His athleticism in itself is entertaining to watch but it's  his overall enthusiasm that is infectious as hell.


Music is another one of those elements that make Eurospy films so enjoyable and Mission Bloody Mary has one of the most wonderful opening songs created by the italian composer Ennio Morricone, entitled Bloody Mary. This haunting yet at the same time groovy track, blasts your eardrums with a tight reoccurring horn sequence that's accompanied by the dynamic vocals of Maurizio Graf. Morricone's musical works are legendary and provide the cinema with some of the most diverse soundtracks that have ever graced the ears of the filmgoing audience. Like his stupendous work on films like The Good, the Bad and the Ugly, Once Upon a Time in the West, Cinema Paradiso, and The Untouchables, Ennio Morricone brings the overall feel of Mission Bloody Mary up a notch in just the opening moments of the film from his expressive and lively main title theme.

Mission Bloody Mary is a great introduction to Eurospy for the uneducated and a perfect stepping stone for the rest of the series to spring off of. It introduces us to a charismatic new agent named Dick Malloy, who has the suave attitude and lethal moves to get the job done and save the day. The look of the film is spot on in that 60's Euro-style way and the various locations that we're presented to in this film is not short of amazing. If you're a fan of Eurospy or someone who just wants to get their feet dirty in the genre, I highly recommend it. It's a damn good fun time.