i Spy Eurospy: From the Orient With Fury 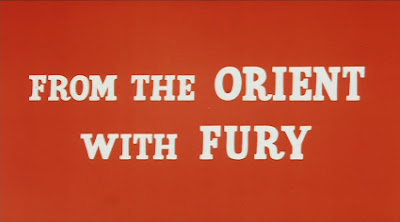 From the Orient With Fury
Director: Sergio Grieco
Year 1965
From the Orient With Fury is a tremendously entertaining Eurospy film that presents Ken Clark in his second foray as the super spy Dick Malloy. This time Agent 077 must recover a kidnapped scientist and his extraordinary invention, a ray gun that can disintegrate solid matter, from a madman named Goldwyn. Can he recover the stolen weapon and its creator or is the world doomed? Of course the film isn't as melodramatic as all that, mostly relying on the fun aspects of the spy trade; guns, girls, and beautiful exotic sceneries. This films got it all in almost excessive amounts, for you'll forget multiple times what Dick Malloy's ultimate mission really is. Not to worry though because in this Eurospy, style is definitely better then substance, especially when there is this much eye candy and adventure to get lost in.
Ken Clark does another outstanding job as the titular spy, whose as good at spying as he is with the ladies. And boy is there a helping handful of them in this film. Unlike Clark's first film in the series, Mission Bloody Mary, he's crooning for the affection of just one beautiful damsel in the form of Helga Line, but in From the Orient With Fury he is bombarded with one female starlet after another. It's interesting that they decided to go this route and just go hog wild with Agent 077's love interests. The change makes for a more hectic movie, thowing any kind of structure to the way side in favor of a more dynamic and diverse slew of romantic interactions for Clark's agent to tackle.


In Mission Bloody Mary, we had Helga Line's character to help build the tension with whether she was truly on 077's side or if she was working with another opposing organization. That tense uncertainty worked its way through the entire film, all the way up until the end of the movie. In From the Orient With Fury, that narrative bridge that held the previous film together so well is now absent, making for a more muddled mess that feels like a number of separate missions glued together.

Now I love both approaches that each film takes, but for some reason the hectic mess that is From the Orient With Fury, seems just that much more random and fun. I love the assorted nature of it and the uncontrollable and contrasting quality of each one of Dick Malloy's encounters. It's strange, but it just felt more enjoyable not knowing what crazy thing was going to happen next. Does it make for a more coherent story, hell no, but it does make for some insanely entertaining moments.

So many women, so little time. Well time doesn't appear to be a factor for old Dick Malloy. In this mission he's tackling three gorgeous women and he's doing it in style. Some are in league with him and some are against him, but all add a special and significant flavor to the film. Fabienne Dali plays the venomous and deadly Simone Degas who takes a slapping of a lifetime from a pissed off Malloy after her failed assassination attempt on the super spy. Spanish actress and singer Mikaela plays a short but memorable role as Dolores Lopez, who has her life turned upside down by Malloy after he wines and dines her and then splits. She performs a magnificent musical number in the small portion of the film that she appears in, but it's a spectacular moment and very meaningful. Then rounding out the ladies is one of Eurospy's most legendary female forces of the genre, Margaret Lee. She plays the character of Evelyn Stone who partners up with Agent 077 to take down the evil Goldwyn. She is absolutely stunning in this film and does a great job of rounding out the cast and complimenting Ken Clark's promiscuous spy.

We get a nice array of locations in this film, from Madrid, Istanbul, and the familiar Paris locations that were present in Dick Malloy's first film. The different looks of each locale is equal to the impressive vistas that were featured in Mission Bloody Mary, so the tradition of the Malloy series sustains its exotic wonder and breathtaking views. This is nice, because you really can't have a Eurospy flick without the globe trotting aspect to go along with it. It's just a part of the overall Eurospy recipe.

Add this with the fact that we get a large assortment of exotic femme fatales and a bat shit crazy mad man named Goldwyn, played by Franco Ressel, and you have yourself a strangely satisfying little film. The fact that they kept Ken Clark as super agent Dick Malloy to continue the spies adventures, only solidifies the series as a consistent addition to the Eurospy genre and one that I always love revisiting. Plus the fact that this film has a freaking ray gun that disintegrates anything in its path. A ray gun! Just saying.

From the Orient With Fury is not as established as its predecessor, but what it lacks in cohesive story telling it more then makes up for it with its over the top sub plot and never ending stream of silver screen beauties. The randomness of the film is highly entertaining and some of the sequences that they come up with in the film is actually pretty effective and appealing.
You really can't go wrong with this movie or any of the Ken Clark spy films. They've got something for every Eurospy lover out there and if you're not tickled by at least something in these ridiculously amusing flicks, then maybe you're taking these movies too seriously. Remember it's all in good fun. I highly recommend this film to all Eurospy devotees and to anyone who wants a little adventure and fun in their lives, even if it's lived through the celluloid life of the one and only Dick Malloy.