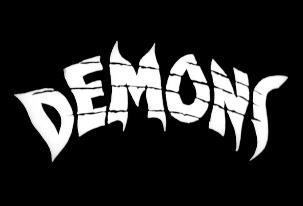 Demons
Director: Lamberto Bava
Year 1985
Demons is a gore filled and highly entertaining italian horror flick that shows just what would happen if the movie that you are watching springs to life and reeks havoc in the real world. The film is brought to stylistic life by Lamberto Bava, the son of one of italian horror cinemas most prolific director Mario Bava. Lamberto shows that he has just as much visual flare and gothic sensibilities as his father providing a technicolor nightmare that mirrors some of Mario's most prolific films. Borrowing heavily from collaborator Dario Argento, Bava presents a bloody film where demons make cemeteries their cathedrals and cities your tombs. Sounds like fun. Let's get started.
The film begins when a pair of friends attend a premiere screening of a mysterious film at a mysterious theater that has just now opened for the first time by a mysterious staff. It's all very mysterious. Anyways, once inside the theater, we are introduced to a motley crew of diverse characters ranging from an old hate filled couple, to two young love-struck teenagers, to of all things a pimp and his two hoes. As the film progresses, strange things begin happening and life begins to imitate art as the demons played out on the large theater screen begin to walk amongst the moviegoers taking them out one by one. This is italian horror at its finest as we see the blood flow in buckets and are served stylistic visual cues in hefty portions. It's enjoyable and the offbeat cast only adds to the unusual flavor.


The great thing about this film is the mechanic of putting a film within a film and having that inner film manipulate the outcome of the world of the real. It sounds very high brow, but don't worry. The technique is hidden under a ton of gore and an unabashed amount of violence, but the fact that Lamberto Bava and company were able to create such surreal yet believable films in one story gives me a warm tingling feeling inside. In all seriousness though, the execution of this duel existence that's sustained in the film is rather accomplished in sense and tone. It's a crazy notion to think that a film can effect the real world and then infect the inhabitants of it, but they somehow make it happen and we invest in that absurdity as truth in this cinema world. That's a pretty big accomplishment for an italian splatterfest, yet there are the usual illogical turns that always crop up in the italian horror genre that both take away from the believability of the moment but at the same time add so much to the overall atmosphere of the piece.


All in all, if you're looking for logic, then all I have to say to you is get the hell out of here. This is an italian horror flick that focuses on demons possessing people from inside a movie. It's 80's, it's gory, and it's entertaining as all hell. Take it for what it is and run with it, because this is a roller coaster ride of demonic proportions. That being said, you'll find everything that makes these italian gore-fests the amusing spectacle that they are. Eye sockets are gouged, flesh is torn, and gruesome practical effects are celebrated with full and utmost enthusiasm. Not only that, but you'll get the ever so dumb decisions made by all the main characters and some dialogue that will have you scratching your head in bewilderment. Man I love this genre.


The people that stand out in this flick are the ones that really go for broke with the crazy lines and over the top actions. Take my main man Tony, the cold ass pimp with an attitude played by Bobby Rhodes, for example. His character just steals the show every time he opens his mouth, spewing classic lines left and right. In one of his most compassionate moments, he sees one of his hoes come bursting out from behind the movie screen after being attacked by a demon. She's covered in blood and basically on death's doorstep, and what does he have to say? "Oh shit! That's a friend of mine!" Priceless. I couldn't have said it better myself. Another perfect execution of hilarious proportions comes when they are trying to break down the projection booth's door. After a few choice hits, it bursts open. They charge into the room only to encounter another door and what does he yell? "Oh shit, another door!" You just have to love it and if you don't get the humor in that, then I would suggest watching something else.


Now it's not the films entire fault for these absurd sounding exclamations and I don't think any less of the film for the inclusion of said dialogue. Italian horror films are known for their strange dubbing and the unusual fact that half of the cast usually spoke separate languages from the other half, resulting in recording a new audio track for the entire speaking cast. For me it adds a certain charm to these movies that make them their own. It's like stumbling into a world that doesn't really exist anywhere else but up on the screen and in our imaginations. It adds another layer to the film and for me it's a welcome change of pace from the norm. I don't really see it as a fault of the film, because the artistic visuals and outstandingly atmospheric soundtracks of these movies more then make up for the lack of sensible dialogue. Bring on the weirdness.


As for the soundtrack, we have a beauty. The creepy synth tunes are provided by keyboardist Claudio Simonetti of Goblin fame. For those that are new to the italian horror scene, Goblin is a band that frequented many italian horror flicks of the 70's and 80's, mostly providing the surreal and haunting soundtracks of horror maestro Dario Argento's films. Claudio's credits include Deep Red, Suspiria, Dawn of the Dead, Tenebre, Conquest, Sleepless, and the list just goes on and on. His contributions to the sound of this genre is unparalleled and his work on the music from Demons stands right up there at the top of his macabre soaked library of memorable soundtracks. Pulling his rock influences to the forefront, Claudio is able to bring something fresh and new to the world of italian horror cinema that also has a catchy groovy beat that's perfect for watching people get slaughtered to.


There's also some pretty goretastic set pieces on display in this film. Especially when it comes to the transformation of normal everyday moviegoers into full on possessed demons. While all done practically, the outcome is grotesque to say the least, as we're witness to the horrific sights of bloody gums replaced by razor sharp teeth and puss filled wounds as they burst like giant white head filled zits. Barf. It's messy as hell and the special effects department in charge of creating these monstrosities, really did their homework in making us want to toss up our lunch over the horrific sights presented to us. As italian horror movies go, Demons has a rather large amount of gross out effects that all do their job in frightful fashion.


What's also impressive with this film is the amount of use they're able to get out of the location of setting the entire story inside a movie theater. The complex is massive, consisting of a balcony, endless staircases, expansive lobby, and a complicated maze of inner air ducts. The characters cover the whole gamut in their ongoing struggle to survive the growing demon horde. There's even an interesting sequence in which the group find a secret room that leads to some ancient tunnels and sarcophagus like chambers. It doesn't make a lick of sense and leads to a dead end in both the survivors escape and the flow of the narrative, but damn is it interestingly weird. Though that's really not the end of the weirdness.


The story also takes another u-turn when it introduces a group of punks led by a tremendous douche named Ripper, played by Lino Salemme. We follow them as they drive around the city, snorting coke from a Coke bottle and basically being assholes to each other. It really is a scene that comes out of left field and you're left wondering what the hell this has to do with the people trapped inside the movie theater being slaughtered by countless demonic creatures. Eventually the punk's story leads them to the theater, but the decision to introduce their story during some of the most frantic moments of the survivors fight remains to be justified. Still it doesn't really bother me that much and goes back to that previously mentioned notion that this special genre always has those quirky moments that make you scratch your head in disbelief, but so is the world of italian horror cinema.

Demons is a rip roaring ride of demonic violence that literally rips your mind apart as it proceeds to delve into some insane and bloody territory. Following the footsteps of past genre efforts, Demons stays close to the formula of blood, guts, and rock n roll. Goblin's Claudio Simonetti infuses an immensely demented score to the atmospherically ferocious visuals and keeps the audible tension of the film intact. Toppled with grotesque special effects that bring the demons to strikingly disturbing life, Demons brings the pain when it comes to the over abundance of gore, crazed characters, and no holds barred entertainment. I highly recommend this film to anyone who enjoys a good old italian horror flick and to those who like your entertainment fun and bloody.