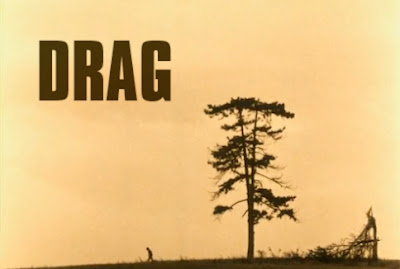 Drag
Director: Mark Pavia
Year 1993
Drag is a unique and creepy short film that brings an original twist to the zombie genre. A lone woman named Victoria, wanders the countryside in search of something, as of yet, unknown to the audience. Armed with a single shotgun and her wits, she battles her way through the zombie infested wasteland of what once was, until she unsuspectingly finds what she's looking for. Fresh meat. Now her biggest problem is how to drag this newfound prize back to her undead lover, who she has chained up at their homestead, so that he may sustain some sort of existence in-spite of his slowly decaying body. Directed by Mark Pavia in his first directorial effort, the film exists in a world that is bled of life and lost in a haze that soaks through to all four corners of the decrepit frame.
Pavia's choice of drenching the entire film in a surreal canvas of sepia is spellbinding. Through this technique, we're given the visually appealing aesthetics of black and white photographic images combined with the dreamlike qualities of a smog filled nightmarish world. The look of the film is outstanding and really makes for an interesting and vibrant piece. I found myself just lost in the haze, appreciating every nook and cranny of this film. Some of the compositions are just outstanding and they really lend a great deal of added atmosphere to the film. It really is a visual feast that begs for multiple viewings and that's something I can really appreciate.


The story also approaches the material with great respect to the genre and to the idea of switching up the formula a bit. It's a very mysterious narrative, where we are not quite sure what our main character Victoria is really all about or what her intentions are. I love the ambiguity of the beginning half of the film, where you're trying to figure out why she is so obsessed with keeping her recently killed body so intact and zombie free. I enjoyed the playful nature of this reveal and how it slowly begins to expose itself to the audience. It's not something that is spelled out for you and it is only really given away in short and vague morsels that nudge you in the right direction. I appreciated the subtlety of the story and the slow pace in which Pavia chose to go about in order to tackle the material.


The music is also top notch, rely on a bevy of long drawn out strings and mournfully filled moaning sounds that provide a perfect soundscape for a zombie apocalypse. The slow and plodding soundtrack really amplifies the despair of the picture and gives a great look into this desperate and lonely world. It's all gloom and doom as Victoria venture across the haggard landscape both during her hunt and throughout her trek back home. The majority of this short film is bathed in a collection of prolonged compositions that mimic the slow nature of the undead antagonists' decrepit movements. It fits the film well and compliments the array of death that is shown up on the screen.


The zombies are also well done for this being such a low budget short in all. These are the old school zombies, the ones that move at a snails pace. There foreboding and ghastly manifestations are a real treat for vintage zombie lovers and ones that take a great deal of inspiration from Romero's iconic mold. The budget may have been a meager $17,000, but the end result is well beyond those restrictions. The actors portraying the walking corpses do an excellent job of putting the fear into the audience, allowing us to be sucked up into the story. There's also some great and nasty moments in the film, like a short finger chomping scene and a few choice kills by the talented main heroine Victoria. After analyzing this short film, I found that there's a lot to love about this small gem of a movie and when you factor in the cost of the whole production, you find yourself appreciating it just a little bit more for accomplishing so much with so little.


My last respects and acknowledgments go out to the actress that plays the role of Victoria. Ellie Cahill plays an intriguing and entertaining heroine, one that is quite unorthodox and highly original. She is tough and capable, but she also has a gentler side to her that we see later on in the closing moments of the film. In the short span of the story, we come to find many facets of her character. She's a survivor and has done countless of ghastly things before the opening of the film in order to sustain some shred of existence. We see the wear it has caused on her through her malevolent actions and we witness the horrors that she must inflict on other survivors in order for her to retain a miniscule thread of sanity. It's a complicated role but one that is handled with complete competence by Cahill. I only wish that she had gone on to star in other roles, because she reminds me of another scream queen legend, Ashley Laurence from the Hellraiser series. Both seem to be able to carry a film on their own and do it with an air of ease. Well done Ellie Cahill. Well done.

Drag is simply a wonderful piece of work by the then budding efforts of Mark Pavia. The atmosphere is spot on, lent in major part by the amazing efforts of the haunting soundtrack and the overbearing visual color palate. The story has just enough portions of the familiar and the absolute appropriate amount of fresh ingredients that it makes for a very interesting tale indeed.
I was pleasantly surprised when I came across this short film and the only thing I can complain about is that I wish it was a full length feature film and that I could somehow obtain a hard copy of this lost gem. I enjoyed every minute of its 35 minute run time and I can't wait to revisit this twisted film again. I highly recommend this film to the zombie lovers of the world. You won't be disappointed.