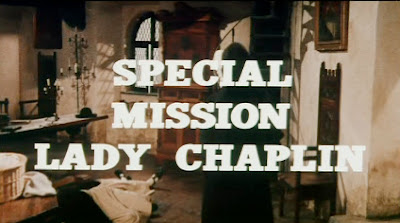 Special Mission Lady Chaplin
Director: Alberto De Martino & Sergio Grieco
Year 1966
Special Mission Lady Chaplin is the third and most competent entry in the Dick Malloy secret agent series, allowing for Ken Clark's death defying agent to really soar next to the ranks of uber-agent James Bond. In this mission, Malloy is assigned to retrieve a cache of nuclear warheads that have recently been stolen from a downed submarine, by a diabolical deep sea salvager who moonlights as a submarine researcher and millionaire extraordinaire, named Kobre Zoltan. To spice things up a bit, Zoltan's chief henchmen is a henchwoman named Lady Chaplin. She's a master of disguise whose talents abound from performing merciless assassinations while dressed as a nun to posing as an old wheelchair bound woman as she snuffs out one of her victims at a poorly guarded hospital. Can Dick Malloy foil this mad genius' plans to sell the warheads to the highest bidder and can he also resist the deadly charm of the dangerous Lady Chaplin? How dare you ask such a ridiculous question. Of course he can.
This entry in the Dick Malloy series is as close to the Bond formula that you can get. We have the evil mastermind that hopes to benefit from some sort of global catastrophe, added to that the amazing locations from all over the globe, and finally to top it all off we get the outstanding portrayal of a femme fatale that matches Malloy in all his cunningness and skillful agent ways. In fact the film starts out with a bang as it presents us with the title character Lady Chaplin, played by the Italian knock out Daniela Bianchi. She just happens to be one of the main strengths of the film, as she firmly takes the film by the reigns and plunges right in. We're given this perfect set up for Malloy's formidable oppenent when Lady Chaplin infiltrates a monastery that happens to be a cover for a secret organization. She takes out the monks there in style and right then and there, we get a pretty straight forward idea of what this film is going to be like. Pure fun. Daniela does a tremendous job in bringing this outstanding and memorable character to life. It's nice to know that after her role as Tatiana Romanova in From Russia With Love, that she went on to even more acclaim within the spy world. Her Lady Chaplin character is definitely one for the Eurospy record books.


As always, Ken Clark knocks it out of the park as he gives the character Dick Malloy another go. His charismatic and often physical approach to the character is always greatly appreciated by this reviewer. I really wish he would have kept the role going, because I would have loved to go on a few more missions with this legendary super spy. In retrospect, it's nice that they ended the series on a high note and kept the integrity of the series intact. I still think that they could have kept this character alive and well, much like what has happened with the Bond series. There is so much potential in Dick Malloy's spy world and the presence that Ken Clark projected in his three starring roles just begged to be continued for at least a few more missions. Oh well, I'll take what I can get and in this film he gives his most energetic and enthusiastic performance to date.


Another Bond element that is highly recognizable in this film, is the inclusion of a sub henchmen that's armed with a hook for a hand, complimenting his mean mugged bastard attitude. This noteworthy character filled that familiar void that many memorable Bond villains had satisfied throughout its glorious history, by having the bad guy possess an unorthodox weapon of his choosing. Just like the character of Jaws, from both The Spy Who Loved Me and Moonraker, where he has his razor sharp metallic chompers to bite at Sir James Bond, we see the same thing in Dick Malloy's outing. In Special Mission Lady Chaplin, this mysterious henchmen wields all of his ruthless anger by the tip of his razor sharp hooked hand. There's some pretty entertaining fight scenes in the film, where Agent Malloy is fighting for his life against the overpowering brute. These moments are pretty heavy in the physical nature of the two combatants and we really get a good tension filled altercation as these two immovable objects attempt to usurp the other. This familiar Bond element really adds to the overall enjoyment of the film.


The main villain, and overall biggest threat to Malloy's health, is the overly ambitious and the overtly over the top named Kobre Zoltan. Why isn't there a band out there with this name? Mr. Zoltan is played by Jacques Bergerac, who brings a sense of swagger and snobbishness to his role of the well to do submarine researcher. It's interesting that, unlike his Bond villain counterparts, he doesn't want to dominate the world or destroy it, rather he wants to benefit from it's destruction by making a small fortune in the transaction of said weapons of mass destruction to the real terrorists. The fact that he carries an air of arrogance throughout the film, makes him a perfect villain to hate and root against. The only problem is that he shows up sporadically and with nothing much to say, leaving much of the heavy lifting of the plot to be done by his second in arms Lady Chaplin. This problematic plot device is later remedied when the allegiances of Ms. Chaplin come into question. It's at this time that we are finally confronted with who the true villain of this piece is. It's a fun little turn of events and one that makes Special Mission Lady Chaplin the wonderful little yarn of Eurospy goodness that it is.

Special Mission Lady Chaplin does a great job of rounding out the Dick Malloy series and ending it on a high and memorable note. The characters are varied and the story is intriguing enough to keep our attention throughout its entire runtime. Ken Clark gives his usual outstanding performance as Agent 077 and there really isn't anything that he doesn't do right in the role. The inclusion of Daniela Bianchi as Lady Chaplin, elevates the film up onto another level, garnering it some great moments and entertaining set pieces. I had a blast with this last of a series and couldn't ask for a better way to close the curtain on this remarkably fun filled journey of Secret Agent 077. This film and the entire series comes highly recommended for spy, Eurospy, and any action film lover that likes their movies to be fun and entertaining. Good stuff.