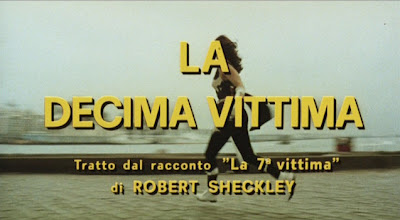 The 10th Victim is a groovy science fiction satire that takes all of the 60’s pop art style of the era and injects it with an over the top futuristic gloss that just screams camp. This Italian gem is a juggernaut of impressive visuals and witty social commentary, as it mixes an interesting story about a deadly game show like club that pits people against each other in order to obtain fame, fortune and glory, and combines it with all kinds of wacky situations and outlandish moments. With its camp approach, wonderfully vivid style, and engaging lead cast, The 10th Victim is a film you won’t likely forget as you soak up all of the outrageous 60’s fashions and satirical overtones.

The film follows two members of a human hunting organization called The Big Hunt, which is a global game show that pits citizens against each other in order to gain fame and fortune. Caroline Meredith is assigned the task of being the hunter, while Marcello Poletti is unknowingly given the role of the hunted. Cast out into the Italian futuristic landscape, both Caroline and Marcello butt heads in a battle of wit and skill, as they both try to outdo the other in this twisted futuristic game of violence and voyeurism. As the game and stakes begin to heat up, the two find that the greatest challenge of this Big Hunt isn’t surviving, but trying not to fall in love with the other combatant. Caught between a rock and a hard place, will they kill to love or love to kill? What the hell does that mean? Who cares, because this is some entertaining shit right here! 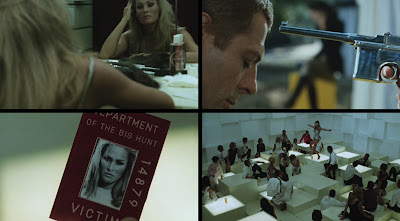 Marcello Mastroianni takes on the role of Marcello Poletti, the professional hunter who finds himself on the other end of the hunt. Mastroianni is a legendary Italian actor who has been in a number of classic films such as La Dolce Vita, 8 ½, and City of . With The 10th Victim he’s able to bring that same esteem and charisma to the production, which results in perfectly mirroring the film’s highly engaging subject matter and fun aesthetics. Mastroianni emphasizes the whimsical nature of the movie as he adds his own trademark cool to the role, simultaneously sprinkling brash amounts of comedy, action and satirical wit into the mix. I’ve still till this day never seen a Marcello Mastroianni movie I didn’t like and this entry is no exception. The man is a cinematic wonder and in The 10th Victim, he absolutely shines.

Pairing up perfectly with the aforementioned Mastroianni is the beautiful and vivacious born actress Ursula Andress. The goddess of cinema, who first graced the silver screen in the James Bond film Dr. No, is a real treat in this special little sci-fi production. She’s cool, sexy and dangerous, and she lights up the screen whenever she appears. This is as to be expected for she made a career out of stealing the limelight from her costars in such films as She, Casino Royale, Safari Express, Africa Express, and The Mountain of the Cannibal God, just to name a few. In the 10th Victim she plays the role of Caroline Meredith, the hunter, and she nails the character with a playful gusto and a more than sexy approach. The only thing more impressive than Ursula’s presence in this film is her outlandish and wild wardrobe, which super-charges the already over the top style of the 60’s with its shock and awe attempt at fashion. 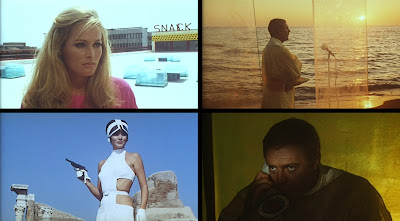 With two cinematic assets like Marcello Mastroianni and Ursula Andress at the helm, you know you’re in for one hell of a wild ride and the film never wastes a second in celebrating this most entertaining of unions. Right from the start, the two main characters begin to clash as they play a cat and mouse game while under the influence of the The Big Hunt. Replacing violence with flirtatious interactions, the two probe each other, never revealing their true intentions. This coy approach is both enduring and interesting, as it takes the harsh and brutal game of The Big Hunt and turns it into a sort of twisted romantic comedy or Italian sex farce, which was highly popular during this time and frequently starred Marcello Mastroianni in the lead role.

As we watch their sordid relationship unfold and we witness the game unwind, we’re plunged into the weirdness that is this future society. Not only do they glorify a game show that depicts people hunting each other, but there is a whole plethora of weirdness that is slowly revealed to the audience as the courtship between Marcello and Caroline heats up. From a strange religious cult who weeps at the sight of the setting sun, to the psychedelic retro-induced night clubs and locations that liter this movie, to the blatant disregard for life and brutality that the society seems to have as a whole, the film is jam-packed with otherworldly and stimulating visuals. In this vein, the style of the film is top-notch and it allows us to get wholly lost in the world that this movie has set up, no matter how weird and unusual it gets. With imagery as solid as this and two lead stars who match the visuals with their scene-stealing light, you really can’t deny the overall intriguing qualities of this cinematically obscure gem. It’s got just the right amount of attitude and pull to suck you in and the unusual aspect of the story and world that is on display is just so engrossing that you can’t help but lap it up. 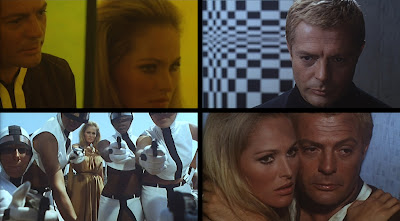 The 10th Victim is a kaleidoscope of style, substance and outstanding concepts, which serve to tell the most cynical and satirical of tales in the most bizarre of ways. Marcello Mastroianni and Ursula Andress are exceptional in their respective roles, and you really can’t refute the appeal of both actors as they literally give it their all and let loose in this most wondrous and absurd of cinema worlds. The decision to peg both Mastroianni and Andress for the two main characters was a stroke of genius, and you can feel the chemistry between the two actors as the film spins wildly out of control on its sex farce journey.

Added upon this already solid foundation is a visual style that is just out of this world campy and simplistically fun. From boob cannons, to mind-boggling architecture, to hypnotic interior designs, to color coordinated assassins, this film literally has it all and in abundance. The surreal atmosphere of this film is energized by its vivid style and expressive color palate, and the audacity of the movie’s cinematic sensibilities is a real treat to visit. If you are a lover of the obscure and you revel in films that play with the notion of reality and bend it to their will, then give this one a go and bask in its strangeness and grandeur. The 10th Victim is one hell of a.....