REVIEW: Hell of the Living Dead 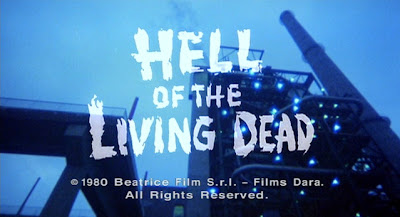 Hell of the Living Dead, AKA Virus, is an Italian zombie film that puts the splat in splatter. Lensed by the trash cinema icon Bruno Mattei, the movie showcases an extreme amount of grit and grim that really captures the grotesque nature of the genre. With its strange cast of characters and its penchant for spilling blood, Hell of the Living Dead is a gory outing that is sure to capture the attention of any lover of Italian horror and anyone who appreciates a good zombie yarn. This movie is Euro-trash cinema at its finest.

The film follows an elite group of commandos and a news reporter couple as they deal with the recent uprising of a zombie apocalypse. Lost in the jungles of New Guinea and surrounded by hundreds of flesh-eating monsters, the motley crew of survivors must make it back to civilization without being eaten first, but with the numbers of the undead increasing, it becomes perfectly clear that most of them, if any, will not make it out alive. With an overabundance of gore and a strong atmosphere of sleaze, Hell of the Living Dead is a zombie apocalypse flick that truly makes you want to take a shower after viewing. Let’s get this disgusting review over with and bring on the walking corpses. 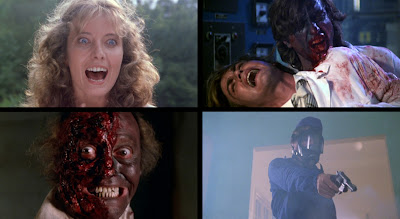 Margit Evelyn Newton stars as Lia Rousseau a news-reporter who has just had the biggest story in the history of mankind land right in her lap, the only problem is that the story just might be the death of her. The character of Lia is a tricky one, because she bounces back and forth between the empowered female figure of the film to being reduced to nothing more than eye candy and stereotypical damsel in distress material. Margit does a good job with both aspects of the role, making for a heroine that is both inspiring and embarrassing. In retrospect, the embarrassing portions of the film aren’t as much of a negative as you might think because after all this is an Italian 80’s splatter film so the silly segments that have our lead actress being forced to strip down to her birthday suit, paint her body in strange and convenient symbols, and go native in order to infiltrate a local tribe, isn’t as shocking as it might be in any other genre or in any other time period of filmmaking. The sleaze factor of the film is inevitable, especially if you’re dealing with Bruno Mattei, and Margit does a great job with the different scenarios that she is given and she’s a trooper for going through some of this wacky and zany ass shit, with a straight face.

The rest of the news team consists of actor Gabriel Renom, AKA The Mustache, as Pierre the faithful cameraman and boyfriend of Lia. Gabriel does an acceptable job with the role, but to tell you the truth I don’t really remember much that he did in the film other than look fabulous with that badass mustache. That’s good enough for me! As for the cast of commandos, Jose Gras as Lt. Mike London leads the team, while Franco Garofalo as Zantoro and Josep Lluis Fonoll as Osborne take up the roles of the funny ones of the crew, leaving Selan Karay as Vincent to round out the team. Each of the team members bring a certain individual aspect to their combined unit, but the most outstanding and memorable of the bunch is Franco Garofalo as Zantoro. The man is a nut-job as he plays a crazy person for a good majority of the film. One of the most entertaining aspects of the movie was to see what insane off the wall thing he was going to do next. All in all, the entire cast of characters do an amazing job in bringing a bit of life to the proceedings from the rather straight forward portrayals to the bombastic and out of control ones. 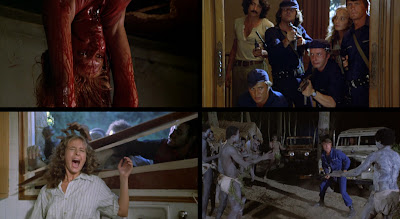 Even though this is a low budget Italian zombie film, which is not as accomplished and respectable as George Romero’s efforts or as haunting as Lucio Fulci’s Zombie, Hell of the Living Dead still manages to bring some memorable moments to the forefront while delivering an atmosphere that is often at times disturbing. The budget constraints and rundown locations that director Bruno Mattei chose to film in, does wonders for the overall look and feel of the production. Things just seem creepy, in that off putting and unusual sort of way and you can’t help but feel a certain sensation of disgust over all that is happening on screen. From the ramshackled and abandoned houses, to the desolate jungle settings, to the empty and cold location of the industrial power plant, things just seem a little off in this zombie world and it’s not because the dead are starting to rise and devour the living. There is an untraceable atmosphere to Hell of the Living Dead that you really can’t place your finger on, but it works wonders on delivery a mysterious quality to the production.

With the ground work set in presenting a strangely obscure setting for the zombie apocalypse, Bruno Mattei then lets the blood fly with a number of engaging and disturbing zombie stand offs where the entire cast must take on throng after throng of undead foes, which slowly begin to whittle down the numbers of their ranks. The effects work in these blood inducing moments are respectable in that low budget sort of way, and the simplicity of their designs actually add to the morbid nature of the world that is created for within the movie. There is nothing too over the top or gut-wrenching in the film, just a steady stream of horrific moments that signify the severity of the situation for all that are trying to survive. We do get a number of zombie munching goodness, but nothing as graphic as we have seen in Romero’s series of films. Still this movie manages to thrive on its low budget nature as an air of disgust permeates the entire feel of the production, making for a zombie movie that is quite literally decaying and decrepit. Sounds like a great recipe for a horrifically good time. Count me in! 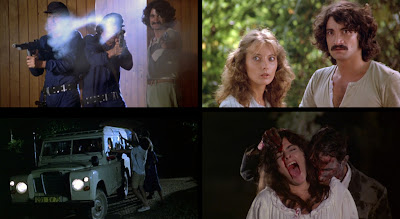 Aside from the cast’s contributions to the film, the overall look of the movie is decrepit to say the least, focusing much of its time within rundown shanties, abandoned homes, and isolated factories. The obscure locations are a godsend to the production, allowing the film to thrive in the inhospitable locales and absorb the dying nature of it all. With the atmosphere established by these unique surroundings, it allows the filmmakers to ease up a bit on the graphic nature of the zombies, while at the same time giving us a respectable amount of gut-munching and flesh-ripping to please our gore loving appetites. With this all said, Hell of the Living Dead isn’t the best example of the genre, but it does manage to etch out a little memorable pocket of the zombie world for itself, and the foreboding atmosphere of the movie is quite intoxicating and devilishly entertaining. If you’re looking for a Euro-trash fix that has plenty of zombies and a respectable amount of sleaze and despair, then look no further than this bad boy. Hell of the Living Dead is…..