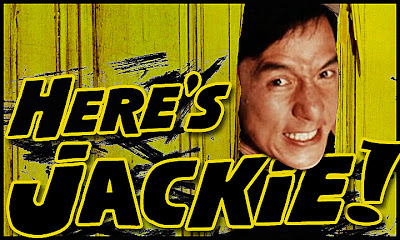 Well let's keep this birthday party train going with my review of Jackie Chan's continuation of his action packed Police Story, the even more action packed Police Story 2. The story picks right up from where we last left our hero, but after his destructive display at the mall he is now been placed on traffic duty. Bummer. To make matters worse, the crime boss that he put away is out again and surprise surprise, he's vowed to make Jackie's life a living hell, again. Thugs begin harassing Jackie as he goes on a date with his girlfriend May, still played by the lovely Maggie Cheung. They even follow May back to her home and rough her up a bit. Those actions are a sure fire way to piss Jackie off and send him right over the edge again.

Don't make Jackie angry. You won't like him when he's angry.

Of course this leads to some great fight scenes where Jackie gets to show off his talents and take on a number of thugs that have pushed him too far. The first fight occurs in a restaurant where the thugs that had previously attacked May are enjoying their lunch. Jackie storms in and starts wrecking the place, using any and all objects in his path as a weapon. After some amazing choreography and a dangerous stunt with an out of control van crashing into the restaurant, Jackie realizes that he has done it again and that his superiors are going to be furious with him that he can't control his wild rage.

As a director, Jackie Chan has found a great rhythm that I believe he has mastered since his humble beginnings on making The Fearless Hyena. You can see the maturity of his direction as the story becomes more fleshed out with each film that he works on. In Armour of God he had the fight scenes down packed, but the story was a little lacking due to the inexperience that Jackie had in directing epic adventure movies. Then he moved on to make Project A2 where he greatly built from his experiences on making the first Project A and ended up making a more comprehensible film from what he learned. I think the experiences that he gained through directing those two movies, allowed him to make an even better film with Police Story 2. The look and feel of the film, along with the progression of the story and the amazing set pieces, prove that he is indeed coming into his own and making more competent and daring films that push his skills as both a director and actor.

Look at all the pretty lights.

He's also improved on setting up his comedy moments. In this film, they are more free formed and seem to feel more natural as it spontaneously pops up within the scene. One of these moments is when Jackie is in a crowded elevator with his superior Bill Wong played by Bill Tung. They are in the middle of a bunch of people and Bill Wong lets some gas escape from his derriere. All of the people begin holding their nose and as soon as the doors open everyone gets out including Mr. Tung. He points back at Jackie's character and basically blames it all on him. The doors shut and Jackie must ride up to the top floor of the building by himself. It's a fart joke, and usually something reserved for an american audience, but the timing and situation that this scene presents itself is quite unexpected and it works as Jackie is always on the receiving end of most of the jokes. It's a silly scene and helps to lighten the dark tone that the film dips into from time to time.

He who smelt it dealt it.

Throughout the film we are treated to scenes of the thugs messing with Jackie and at critical points Jackie fights back starting an avalanche of kicks and punches that culminate into a full blown fight. One of the most memorable fight scenes in this film happens at a playground at night and Jackie uses the environment to his full advantage, breaking noses and taking names.

He throws advisories into slides and narrowly escapes blows by diving through monkey bars and climbing over various metal structures. It's amazing to see it all in motion and at such a frenzied tempo. It is almost like a violent ballet, where all the moves are choreographed to perfection as the entire cast collects their bumps and bruises. The style of fighting that Jackie has improved on throughout his career is so engaging and never leaves a boring moment in its wake as it plunges forward, that it proves that he is a true master in his field.

This playground fight even spills out into the surrounding areas as Jackie attempts to flee from the chaos. He rushes down an alley only to find that it is a dead end. Two of the thugs corner him as they drive their car down the alley. They slam on the gas and hurdle towards Jackie at a tremendous speed. Jackie runs as fast as is fantastic feet can take him and narrowly escapes by jumping up the dead end wall and letting the car smash into it at full force. Jackie lands safely on the hood and proceeds to bash in the windshield with a drop kick, knocking out his would be attackers and remaining the bad-ass that he is. This scene is fabulous in portraying the creative ways that Jackie comes up with to choreograph a fight scene that you've never seen before and that no one had the guts to try to accomplish.

Now back to the comedy. As our film progresses, Jackie's superiors are trying to get him to help them out on a case where a terrorist bomber is threatening to blow up a group of building owners if they don't send them 10 million in cash. They send Jackie into the fray and he goes undercover in the most ridiculous disguise that he could come up with. Who am I kidding? I love the disguise. So just as another action set piece comes to an end, we are treated with a comedic scene to pull the reigns of the film back, so to speak. It really is entertaining to see Jackie ham it up in his disguise.

Holy Hell! I didn't know that Tom Selleck was in this flick!

Naturally, as Jackie gets closer to finding out the identity of the bombers, they begin to mess with him in turn, until they eventually kidnap May in order to bait him in. The desperation on the face of Jackie as he tries to find out what happened to May is an interesting side of Jackie who is usually sure who the enemy is. This unknown villain really flabbergasts him and it kills him that he doesn't know where they are or where they are keeping May.

Bomber: So what are you wearing?
Jackie: A tan suit.
Bomber: Oh. Sexy.

Jackie is eventually captured by this unknown threat and is tortured and then forced to strap on a vest with a bomb attached. It's safe to say that this film ramps up the danger and gives Jackie a little more consequences for his actions, grounding him in a more thriller like territory. This still doesn't cool his demeanor though as he proceeds to go ape shit all over the place, warning people about the bomb and causing all sorts of panic as he reaches the building to pick up the ransom money.

Not the best way to keep people calm when
you tell them about the bomb strapped to you.

The sequences after Jackie obtains the money are great as he figures a way out of the bomb vest and then tracks down the bastards that put him in it. There's a great sequence that has Jackie jumping from the roof of one truck to the roof of another, just before he dives headlong into a glass window to get into a building that sits across the street. It's a really breathtaking stunt and one that was pulled off with meticulous planning and expert timing. There's one thing that you can say about Jackie and that's he really makes it look easy. One look at this stunt and you'll wanna go all Teen Wolf on your van and go car surfing.

Once the bad guys are cornered, we are given an outstanding final fight between the bomb maker and his cronies versus Jackie and his swift moves. There are so many falls that make you go, damn that's gotta hurt, but the falls just keep progressing until you have people just dropping from two story buildings. It's out of control and the fact that these stuntmen survive is beyond comprehension. They must have a very different build over there in China, cause if I fell like that I'd be paralyzed for the rest of my life. Either way, Jackie continues to bring the pain and save the day.

Do you understand the gun that is pointing at your face?

As the day is saved and all is right with the world, the movie ends with a bang as the fireworks factory where the fight took place begins to erupt. Jackie dashes from the blaze in stylistic super slow motion, putting another chaotic end to a case now closed. Is there anyway that Jackie can end a case without destroying something? The world may never know and I for one don't want to live in a world like that anyway. Give me the reckless Chan any day.

Well the fireworks were for everyone to enjoy so we all lose.

Police Story 2 is just as great as the first film, delivering amazing choreographed fights, silly situations, and enough stunts to shake a stick at. Jackie does an expert job with the direction and really seems to have grown over the course of the last few films he's been involved with. There are so many impressive moments that are beyond belief and they are all pulled off with a practical eye and proficient skill by Jackie himself. If there were any awards for a film that accomplishes everything its predecessor accomplished, but built up from its already perfect foundation, then this film would earn it with no contest.

Police Story 2 is living and breathing proof that a sequel doesn't have to suck and magic can be captured again as long as you have a team that can put their heart and soul into a film and not mind the bumps and bruises that come along with completing such an immense task. This film is highly recommended for Jackie Chan fans and anyone that likes to see beautifully choreographed fights that surpass expectations.