REVIEW: Siege of the Dead 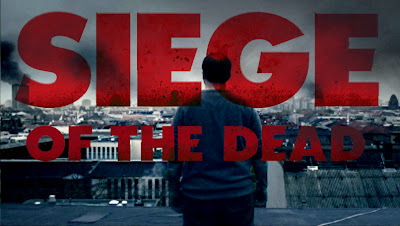 Siege of the Dead (Rammbock)
Director: Marvin Kren
Year 2010
Siege of the Dead, or Rammbock as it's called in its native Germany, is a magnificently done and intimately portrayed little zombie film. The movie follows an average joe named Michael, played by a low key Michael Fuith, as he arrives in Berlin to confront his estranged girlfriend Gabi. This already awkward meeting turns to horror when all hell breaks loose, turning ordinary citizens into rabid, fast paced zombies in the vein of the 28 Days Later series. The film doesn't revel in displaying a full blown and epic zombie armageddon, but rather decides to stay close to the main character as he deals with the extraordinary circumstances that he's been thrust into. I love this approach and really appreciated the simplicity of the story.
The film also takes this simplistic approach another step further, by making the character of Michael as unextraordinary as possible. I mean if you look up the definition of 'Average Joe' in the dictionary, there would be a picture of this guy. He's bland and as uninteresting as they come, but for some reason that makes his character that much more effective and believable. By doing this, the filmmakers create a world that's striped of Hollywood perfection and instead lambasted with grit and grim. You're presented with everyday people in not so everyday dealings and it works because it's so grounded in that realistic and wholeheartedly homely world.


I really haven't come across a film world like this, well at least not in American cinema as of recent. It's an ugly world, one where the hero isn't always the strong hercules type model with flowing hair and bulging biceps and the women aren't ridiculously attractive. Instead we're given Michael, an every day guy whose socially retarded, totally inadequate, and suffering from a broken relationship with a women whose way below the richter scale on passable beauty. At first, this unorthodox approach took me off guard, but as the story progressed I realized that it helped the film rise above that kind of superficial blockade that Hollywood has incased itself in, and became something of a new breed.


By grounding the film in a 'true' real world setting, it helps to make everything that's happening in the film, that much more believable. This paves the way for introducing the fantasy element of the movie, and that's the zombie outbreak. After setting up Michael's sad story in a short monologue of sorts, we're placed on the doorsteps of Michael's ex as he slowly climbs the stairwell of her apartment complex. This underwhelming march of death is then suddenly jolted to life as Michael makes his first abrupt contact with the crazed citizens of Berlin. From here on out we never feel safe or comforted, because there is always a possibility that at any time Michael could meet his end.


The action is quick and hectic when it occurs and Director Marvin Kren really knows how to push a scene along in a natural and pleasant manner. When I say this is a fast film, I mean it is a really fast film. From start to finish, you'll feel the time just whipping by as Michael fights for his life against these hordes of unknown enemies. It's strange that such an intimate film as this can feel so fast paced and rushed, but somehow the filmmakers of Siege of the Dead pulled it off. That's not to say that there aren't some moments of reflection for the characters, but on the whole this is a roller coaster ride that takes us from one set piece to another.


When I talk about Siege of the Dead being an intimate film, I'm mostly talking about how this entire film takes place inside a small apartment complex where the story focuses on the residents that live there as they try to cope with their building and surrounding area being overrun by the recently ravenous dead. The elementary nature of the location allows for some interesting situations that bestow onto the film a claustrophobic induced atmosphere that never lets up. We move from inside apartments, down hallways, and up dark stairways, all with a feverish paranoid sensation that at anytime our characters could be prey to another venomous ghoul. The tension factor is high in this film and it's due to the outstanding location of the apartment complex.


Even though this is a claustrophobic film, we are treated to a lot of various locations within the complex. There's some impressive moments where we are thrown from one room to the next, even breaking through walls to get to a neighboring apartment to escape the rabid mob. That's one of the most effect aspects of this film, as we go from place to place mimicking the desperate escape of our main characters. The flow of the chase is wonderful to watch and really gives us a sense that we are being chased by these throngs of zombies. I loved every moment that the filmmakers threw at me and I was never bored with what they came up with. In fact, I marveled at the creativity that was on display here. There's some top notch ideas that come into play in the film that I always wanted to implement into my own kind of zombie movie.


My favorite location of this complex though, has to be the courtyard where most of the action takes place. There's a large concrete lot, smack dab in the middle of the apartment complex where all of the residents in the film have windows facing into. They watch in horror as the mass of zombies congregate down below, ripping anyone to shreds that dare try to escape through the only exit in the building. The placement of this courtyard is brilliant and the central notion of the lot is essential to bringing the surviving characters together and allows the narrative to thread their stories a bit and connect the motley group to one another even if they are bridged by large spaces.


There are many memorable scenes in this film which owe a great deal of credit to the courtyard and the visual vistas that it provides. Moments where the various inhabitants of the complex communicate with each other from their windowsills is one of the more genius ideas the film comes up with. We are given just a narrow and fleeting peek into their lives from that one window, but through that small device we are given so much information about who they are and what they are going through. One man stares blankly out his window, almost in a hypnotized manner. Another tenant, a brother and sister pair, debate on whether to stay put or make sure the front gate is secure. There's also a married couple who are in dire  straits because one of them has become violently ill and needs medicine. These small details provide a lot of character and color to the film, helping us get caught up in the moment and allowing us to sympathize with each person's unique situation, even if they are just minor characters.


Let's not forget about the most important character of all, the zombies. Now Siege of the Dead is not a terribly expensive film, but the look and overall style of the undead creatures is quite impressive. Taking a page from the book of the more recent zombie films, these bad boys are hyper kinetic chasers that lurch and bound in strides as they hunt for their next meal. Their jerky nature and horrible temper tantrums remind me of the Rage victims of 28 Days Later. Though they resemble those similar creatures, Siege of the Dead brings an original sub plot to the table by conjuring up a new way to keep the crazed monsters at bay. I won't say what it is, but the idea of it works and it's pulled off rather lavishly in the final moments of the film. I was impressed by the execution of this plot device and was very satisfied with its inclusion in the film. It's always nice to see something new creep up in zombie lore to keep the tales of these decaying corpses feeling fresh and new.

Siege of the Dead is just a blast and it's refreshing to know that this genre is not even close to being dead in the water. The filmmakers bring a lot of new ideas to the table and establish this twisted story in a world that is unlike anything we've seen in the past. The characters are interesting but grounded in a very real world. One that's unattractive, flawed, and just plain messed up. The zombies are superb and as frightening as they've ever been on the silver screen. You really feel the tension in every inch of this film and it shows. I'd highly recommend this film to all zombie fans or any one who wants to see a non Hollywood take on the genre. This is definitely a flick you must hunt down and see for yourself. There's a whole lot of zombie goodness to love.