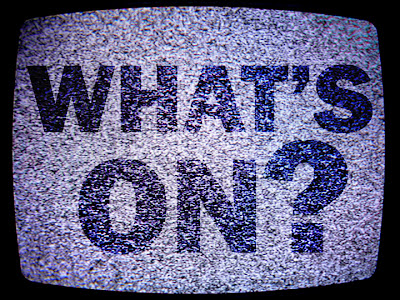 Posted by Jay Shatzer at 9:46 PM No comments:

Labels: Agent 3S3: Massacre in the Sun, Fright Night, Hell of the Living Dead, Images, Juan of the Dead, The Martian Chronicles, Total Recall, What's On?

REVIEW: Ghost in the Shell

Ghost in the Shell is a fantastic science fiction animated film that delves into the true essence and meaning of life by commenting on the possibility of machines becoming something more than just soulless creations. This evolutionary step in both animated features and thought-provoking storytelling is a shining example of how filmmakers can use the medium to create some rather inspiring narrations on the human condition, both in its significance and unprecedented ramifications. Filled with action, beautiful artistry, and an intriguing plot, Ghost in the Shell is not only a masterpiece, but it’s a classic example of how truly complex an anime can be.

Set in the year 2029, the film follows a team of high-level government operatives lead by a tough as nails female cyborg cop named Motoko Kusanagi, as they police a cyber-punk metropolis for malicious anarchistic hackers aiming to disrupt society. Their recent case has them hot on the trail of an illusive and notorious cyber hacker named ‘The Puppet Master’, who is wreaking havoc across the interactive network which is connected to all of the people of Earth. What makes this miscreant’s actions that much more alarming, is that they seem to have an unhealthy fixation on Major Motoko Kusanagi and her relevance to being a cyber-genetic creation. As they narrow in on their suspect, they come to a shocking realization that ‘The Puppet Master’ may be far more complex and unsettlingly then they ever bargained for. One thing’s for sure, the world won’t be the same once this mysterious hacker’s true intentions come to light. 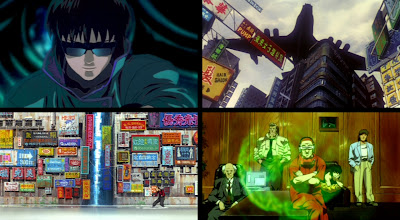 With the metaphorical connections in place and the stage set, Oshii pushes the visual look of the film into uncharted territories as he allows the grungy nature of this world to spring to life in the most expressive of ways. From the darkened back alleys to the neon caked and congested streets of the city, the lived in nature of this fictional world is exceptionally crafted. Through this meticulous recreation, born from Oshii’s mind, we really get a chance to feel the age of the expansive metropolis and it’s the detailed way in which he introduces us to each various location that really builds up the history of this technologically driven world. Not only do we get to visit the thriving portions of the city, like the looming skyscrapers and corporate headquarters, but we also get to see the more traditional and weathered side of this aged society. The best example that showcases the visual scope of the landscape is the precious moments in which we get to traverse through the film’s less refined locations. For instance, the chase scene that occurs in the marketplace, where the crew is chasing down a suspect, is one of the most visually impressive moments of the film, allowing us to revel in the sheer wonder and scale of the world at hand. I absolutely loved the look of the packed shopping district, filled with its diverse characters and kaleidoscopic colors, and the closing moments of the scene really gives the viewer a feast for the eyes, not to mention a miraculous fight sequence. 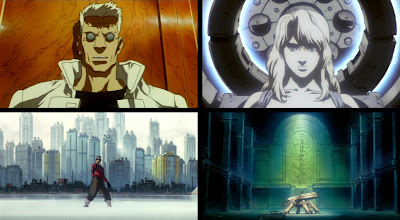 It is in this shocking and visceral moment, filled with painfully perverse gore, that we are presented with one of the film’s most poignant images. We watch the mangled Motoko as she lay disjointed on the ground and we are taken aback by the realness of the moment. Though she is just a machine and conceivably without a soul, we still relate that humanistic trait to her and we sympathize with the predicament that she is in. It’s this strange conundrum that drives the entire series up to this point. Are machines more than machines? Can they evolve into something else entirely, even without the aid of the ones which created it? As her human cover is stripped from her body, we still come to compare her to human because of the actions that follow this pinnacle moment. This instance is a great bridge to the overall arc of the story, and what continues is a revelation that truly feels inspired while still managing to maintain a certain esteem of mystery and wonder. With its unapologetic approach and masterful storytelling, Ghost in the Shell is a science fiction animation that really raises the bar on animated features. 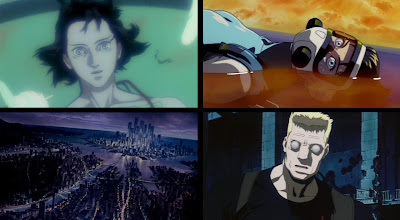 With its heavy dose of cyber punk style and its tendency to get a little gritty and disturbing, Ghost in the Shell tells an intriguing story about the evolution of man and the inherent plausibility that the things that we create could somehow become equal to us. In this nightmare scenario, the filmmakers decide to bridge the gap between man and machine by establishing a world where technology and humanity are at a merging point. The union of these two entities, though bloody and foreboding, is exceptionally crafted and even though there is a great deal of violent, bombastic flair, the story is surprisingly spiritual as it goes about spinning a yarn about the soul of a machine and the evolution of life as we know it. Simply put, Ghost in the Shell is one…..

Posted by Jay Shatzer at 8:59 PM No comments:

LET'S GET HAMMER'D: The Curse of the Werewolf 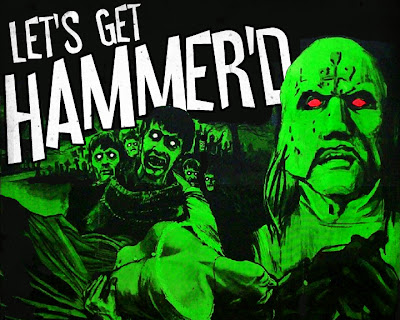 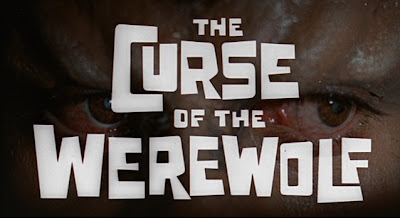 The Curse of the Werewolf
Director: Terence Fisher
Year 1961

The Curse of the Werewolf is a haunting tale spun by the masters of the macabre, Hammer Film Productions. Centered on a curse born from one single evil event, the film focuses on the ill effects and unexpected results that come from that one fateful day. In usual Hammer fashion, the production is drenched in atmospheric imagery and foreboding scenery, which in this particular case enhances this werewolf tale to unparalleled heights. With its exceptional cast and highly effective make-up work, The Curse of the Werewolf makes for a creepy monster movie that doesn’t shy away from making its lead protagonist sympathetic as well as tragic. This is one howl of a sick flick. Damn that line was lame, but let’s press on anyway and tackle this classic yarn.

The film opens up in wild fashion as we follow an intriguing tale that results in the raping of a mute chambermaid by the hands of a wrongly imprisoned and now wild and crazed hairy beggar. After escaping the clutches of the Wildman and murdering her cruel employer, the woman sets off into the wilderness in hopes of starting a new life. Lost and exhausted, she fortunately crosses paths with a nobleman named Don Alfredo Corledo and he takes it upon himself to bring her back to his chateau, where he and his servant Teresa can nurse her back to health. Upon examining, the two come to find that the woman is with child, but not all is normal with this pregnancy. A series of misfortunate events begin to arise as the mother dies soon after childbirth and the now healthy baby boy Leon is having persistent nightmares that have him scouring the countryside at night in search of fresh meat to satisfy his bloodlust. What is happening to this innocent young man and can he live a normal and productive life as he grows into adulthood? Who knows, but if I was a villager in the area I’d be stocking up on silver bullets like there was no tomorrow. 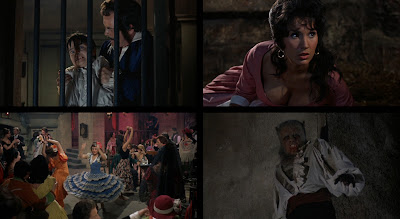 Of course Reed is not alone in bringing this story to life and he is accompanied by an excellent cast of character actors that aid in rounding out the world of the film. Clifford Evans plays the role of Don Alfredo Corledo, the charitable man who takes on the weight of the world when he lets ’s pregnant mother into his home. Not only does Evans portray a central character that spans a number of ages, but he also narrates the film, explaining all that is going on from his perspective and what has been told to him on what occurred from the beginning of this sordid tale. Evans is great and he does an impeccable job with the material given to him. The struggle that his character is constantly plagued by in trying to find a way to make ’s life full and fruitful despite his inflicted curse, is heartwarming and commendable and Evans truly does the role justice. 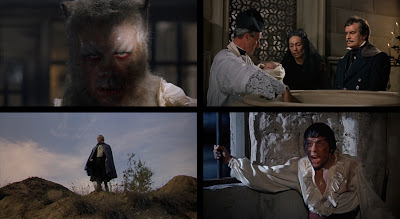 With all of these characters in place and the stage set for an epic tragedy, the film does a tremendous job in allowing the tensions of the moment to spring forward and propel the story along. The tense sequences in which Leon is bracing for the change, from normal and passive young man to savage and uncontrollable beast, are extremely powerful, and the make-up effects that follow these palpable moments are equal in their impact to the atmosphere of the film. Being a Hammer production, you know you’re in for a treat when it comes to the look and feel of the movie, and when it comes to The Curse of the Werewolf you’ve got nothing to fear in that department. The locations and sets are lavishly gothic as they’re all shot in that stylistic way that sets Hammer films apart from the rest of the pack. The night time scenes especially have that Hammer glow and there’s not a better example than when the villagers are chasing as the Werewolf around the town with torches and pitchforks in tow. Overall the film is visual poetry with a mournful allegory that pulls at the heart strings as well as scratches that insatiable itch for slickly presented horror. 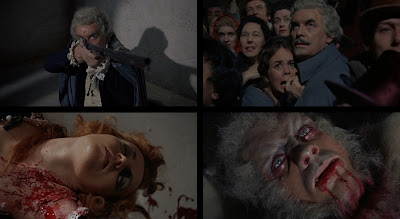 As mentioned before, the cast is extremely devoted in emphasizing the doom that lays at the end of this twisted path and each actor brings their A game in presenting this fact with great lament and substantial remorse. The pain that is laced in the faces of everyone involved seems to perfectly mirror the dire situation that this film tackles. An innocent born into a cursed life is the central fixture of the story, and this unfortunate circumstance is felt throughout the runtime of this movie, almost to unbearable degrees. Though the theatrical nature of the production doesn’t showcase this bitter sweet agony as being rather severe, the overall powerful atmosphere that it creates is absolutely compelling. As I’ve previously stated, Oliver Reed is fantastic in the role of Leon Corledo and he tackles the sensitive and savage natures of his character with expert professionalism. When it comes to Werewolves, Reed makes for a frightening beast. The Curse of the Werewolf is a…..