REVIEW: The Golden Voyage of Sinbad 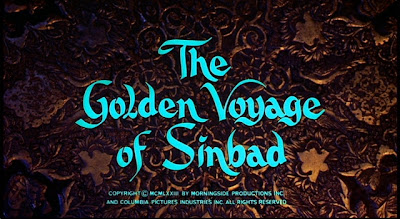 SINBAD! There's one name that is engrained in my head. One that automatically makes me think of fun-filled fantasy adventures permeating with cool mythical creatures and that name is Sinbad. Forget the comedian of the same name because this Sinbad doesn't do family comedies. Instead he's all about adventuring, battling beasts, and picking up chicks. You can call him the fantasy version of James Bond, but I'll just call him Sinbad.

In The Golden Voyage of Sinbad, the titular character finds himself embarking on a most interesting and mysterious quest that leads him into both perilous situations and interesting company. After coming across a strange golden amulet and then coincidentally coming into contact with a strange golden mask-wearing man named Vizier, Sinbad and his crew set sail to discover the answers to this intriguing puzzle of the amulets purpose. With danger around every corner, can they unlock the mystery behind the golden amulet, or will this adventure claim their lives? Sinbad you crazy bastard! Let's set sail! 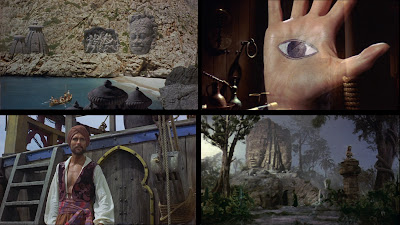 The Golden Voyage of Sinbad is one lavish production and its quality shows throughout the entire spread of the film. From marvelous matte paintings, to exquisitely imagined miniatures, to drop dead gorgeous sets, the visual splendor across the board is unparalleled. What is also an impressive feat is that each intricate effects laden shot is intertwined flawlessly into the story, never taking away from the broad spectrum of the outlandish journey. It instead makes the film feel cohesive and lived in, thriving across the screen as we go along with Sinbad on this outstanding, fantasy imbued, ride.

You will literally be taken aback at some of the wonders that grace themselves across the screen, at the most unexpected moments. Gargantuan beasts, tiny winged creatures, and stone and wooden statues spring to life, thanks to the skillful hands of animation master Ray Harryhausen. The man is a legend of the cinema and we get to see first hand how truly great the man was. The Golden Voyage of Sinbad showcases some of his most impressive work.

There is a scene in the closing moments of the film that really gives us our moneys worth and proves that Harryhausen is the master at what he does. This moment occurs when we witness a centaur clash heads with a wonderfully imagined griffen. The presentation is remarkably crafted and the two creatures look immensely powerful, as they gnash and snarl at one another. It's strange that when the two fictional creatures spring into battle, you begin to feel a prick of sympathy and a heavy dose of pitty for the losing beast. I credit that to Harryhausen's outstanding animation work. His mastery allows us to believe that these are flesh and blood monsters, proving possibly that stop motion animation was a better effects method in injecting life into an inanimate object.

It's true that with the more modern day computer generated creatures like Weta's Gollum and Planet of the Apes' Caeser, we get a photo realistic looking being with plenty of emotion and heart, but there is something missing with those creations. There is a tangible void of representation that is always there with these CGI infused creatures, and there's a separation between the live action counterparts and the man made wonders that supposedly share the same space. The same goes for these older films and Harryhausen's work, but for some reason, the way they were filmed possibly, it isn't as soulless and fabricated. I guess it all comes down to a matter of opinion and what you're preferences are, but I've always felt that Harryhausen's works were more grounded in reality over the more computer generated creations of modern day cinema. Oh well, they're both great techniques and have produced many masterpieces, but Sinbad rules! 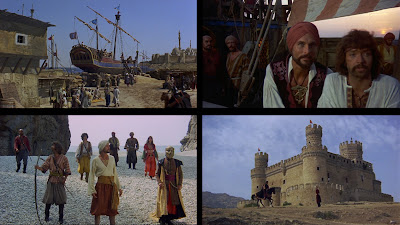 Aside from the outstanding works of Ray Harryhausen and the impeccable production designs, the film has a tremendous set of characters to play around with. Leading the pact is cult film star John Phillip Law, who has brought us such memorable characters like Diabolik from Danger: Diabolik and Pygar from the outstandingly psychedelic Barbarella. The man is entertaining as hell and he brings an exciting energy to his role of Sinbad. Each actor that has portrayed Sinbad in the various other iterations have brought their own sensibilities to the role, but I find Law's approach to be the most intense. Maybe it's his eyes, but the man has a demanding screen presence.

Speaking of screen presence, how about that Caroline Munro! Ever since seeing her in William Lustig's Maniac, I've been hooked. She's just a breathtaking actress that can literally steal a scene by just walking into a room. Her credits run long, but her most stand out rolls would have to be Captain Kronos - Vampire Hunter, At the Earth's Core, The Spy Who Loved Me, Starcrash, and The Last Horror Film. All great flicks, only enhanced by the inclusion of Munro. In The Golden Voyage of Sinbad, Caroline plays a slave girl that is swept up into the high adventures of Sinbad, often finding herself in danger and needing to be saved. She looks amazing in this one, as the screen shots can attest, and I'm glad that she found herself in one of the Sinbad films. You gotta love the Munro! 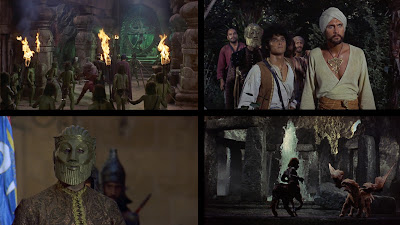 The Golden Voyage of Sinbad is a great fantasy flick during a time when stop motion animation was king. Ray Harryhausen's hand in this film can be felt throughout the entire production, leaving a very heavy atmosphere of Greek mythology colliding with strong fantasy based visuals. The combination, as always, is astounding, giving way to one of the most entertaining genre turns of the time period.

The acting across the board is both energetic and captivating, especially when you stop and realize that many of the actors were reacting to nothing at all when it comes to the creature scenes, which were aplenty. From wooden and stone statues coming to stark life, to mythical creatures, this film has the goods, giving enough fantasy en-charged flavor to satisfy any cynic of the genre. The bottom line is that this film is........