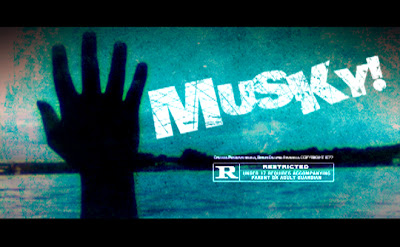 Well, it's finished! For anyone who's in the dark on what the MUSKY! trailer is all about, well it's basically an inside joke that went way further then it was initially supposed too. A handful of years ago, my friends and I came up with a running joke about a killer musky that attacks boaters and swimmers on Canadohta Lake in Pennsylvania where we frequently hang out throughout the year during random get-togethers. One of us said we should make a short movie trailer using that concept and basically five years later we got off our collective asses and finally filmed the damn thing.

We tried to make it into a 70's / 80's grindhouse type flick with a heavy emphasis on ridiculousness and in the end I think we matched the look, feel, and sound of that era. Well, without further ado, here is the grindhouse infused musky exploitation flick....... MUSKY!
Posted by Jay Shatzer at 9:19 PM