REVIEW: The Fabulous Journey to the Center of the Earth 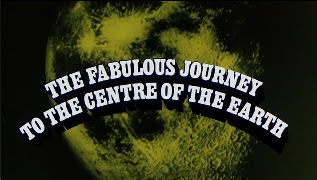 The Fabulous Journey to the Center of the Earth
Director: Juan Piquer Simon
Year 1975

The Fabulous Journey to the Center of the Earth, also known as Where Time Began, is a fantastically and dare I say it fabulously fun adventure of a film. Directed by Juan Piquer Simon, the movie is a blast from the past, representing the big fantasy boom of Jules Verne inspired stories along with some of his own, most heralded, writings. The Fabulous Journey to the Center of the Earth was one of the many fantasy infused novels to be brought to the silver screen and in Juan Piquer Simon's case, he created a cinema world that is as vividly curious and as wholly satisfying as Mr. Verne's original stories.

The film opens in a book shop where a haggard old man passes off a strange diary that tells of a hidden entrance in a volcano which serves as a gateway to a whole other world hidden deep within the earth. The strange tales of the book sparks Professor Otto Lindenbrock's interests, inspiring him to form a small expedition to this volcano. His group comprised of his niece, her boyfriend, and a sheep herder, set off on an adventure that is both fabulous and unexpected.

The locations for the film are simply bizarre in their unfamiliar nature, creating the perfect kind of set up for making us believe that they are indeed on a journey through undiscovered territories. The barren landscapes, the crystal clear underground oceans, and the over-sized flora and fauna appear to be lost wonders of a forgotten subterranean world. It really is a considerable accomplishment when you keep in mind that the film's budget was fairly low for the kind of material they were taking on. Grand spectacle usually means an even grandeur budget, but thankfully the crew went the more creative route and worked with what they could afford.

It's pretty impressive that the filmmakers were able to pull off some amazingly effective atmospheric moments with such a budget crunch and a lot of the credit can go to the successful scouting of locations and the efficient use of both them and the blending of extensive stage work that had to be done to match the two. The practical nature of the production and simplistic execution of the natural landscape juxtaposed with the studio shots, really lent a good deal of believability to the film, allowing me to believe in something as absurd as a field of giant tortoises.

The film really excels in outlandish moments like the tortoise herd scene, where a large number of rock formations quickly come to life to reveal that the valley the adventurers are walking through just so happens to be the home of a gaggle of gigantic ravenous turtles. It's excruciatingly strange, yet highly entertaining, much like the crews next encounter with over-sized mushrooms. Over-sized mushrooms? How could over-sized mushrooms be anything but over-sized mushrooms? Well these mushrooms are made of wood and if disturbed, they unleash a poisonous pollen that renders their victims a quick death. Well at least that's what we're told by the good Professor Lindenbrock, but we never really get to see anything as brutal as that happen to one of the main characters. In fact, despite all of the dangers our heroes come into contact with during their fabulous journey, no one actually dies from any of these encounters.

This notion is actually quite strange for the genre during this time period, because in many of the fantasy adventure films of the time there were always a few deaths to help prove to the audience that they were indeed on a perilous expedition that could claim their lives at any moment. Interestingly though, The Fabulous Journey to the Center of the Earth opts out on this angle and instead gives us a more whimsical romp through one set piece after another. There might not be much danger or fear set upon the audience, but the entertainment value and wonderful encounters made by the adventurous crew are just as entertaining as the more daring examples of the genre.

Even though the death tally stays at zero, that doesn't mean that we don't get any real blood or violent moments on this quest for fun. A few encounters with the plethora of prehistoric beasts in this lost world are quite violent and sometimes bloody. The best example of this would be the sea serpent attack. During the crews voyage across the expansive ocean, they come upon a battle of life and death between two dinosaur like creatures. They tear at each others flesh and draw a good amount of blood, even ripping limbs off and everything. This is all accomplished with puppetry of course, but still the ravenous shot of a sea serpent thrashing over and over again in a sea of blood was quite a nice touch to the overall G rated affair that was witnessed previously in the film.

The creatures are another staple of the films assets, that is if you respect the practical effects of the era and overlook the obvious drawbacks that come with the territory of being strapped for cash while living in a CGI-less world. I for one love this style of creature effects, which blends the aspects of Japanese Kaiju monster effects with the inclusion of traditional puppetry. The combination is somber and sufficient, gelling nicely in a world that only exists on the celluloid roll. It may not be fancy, but damn it there's something about these kind of practical and simple effects that bring about a certain nostalgic style that just works for me.

Let us not forget the fearless crew of this fabulous journey. What was rather nice about this film is that they kept the cast between a handful of people, allowing for each of them to get their fair share of screen time. Kenneth More leads the pack as Professor Lindenbrock and he plays the character with a great deal of enthusiasm and curiosity. Accompanying him is actress Ivonne Sentis as Lindenbrock's niece Glauben and actor Pep Munne as Axel, her boyfriend. Both of them share a rather interesting relationship that initially starts out as playful, but eventually morphs into love as they experience one fantastic event after another. The actors did a commendable job in their roles and worked well against the practical effects that I can imagine would be hard to take on with a straight face. Rounding out the main cast is sheep herder and human pack horse Hans Belker, played by Frank Brana, and one of the most curious men to grace these outlandish stories, not to mention the silver screen, Jack Taylor, who plays the aenigma known as Olsen.

Taylor is one of my favorite odd ball actors, because he seems to just turn up in some of the strangest films. Take his role in another one of director Juan Piquer Simon's films, Pieces. He plays a college professor who is as awkward as they come, being hit on by his own students while at the same time always looking as suspicious as hell. Now that I think of it, he kind of does the same thing in this movie. He's awkward as all hell, slightly catches the eye and curiosity of Ms. Glauben, and is so mysterious that he just begs suspicion. I guess that's just the kind of guy he is, a mysterious creep. Add all of these wacky characters together and you've got yourself a highly entertaining crew to support an equally highly entertaining film.

The Fabulous Journey to the Center of the Earth is as interesting a film as you'd expect. It's a movie filled with some creepy creatures, splendid locations, and seemingly simple yet heroic characters. The lack of any real danger is quite apparent, but that doesn't take away from the wonder of visiting this outlandish world. Director Juan Piquer Simon has a knack for telling stories that are so out there and unbelievable, yet at the same time grounded in some strange and unexplainable form of tangent cinematic universe, that it all remarkably makes sense.

I guess if there was a person to adapt Jules Verne's story to the silver screen, then Simon would be the perfect crazy bastard to do it. I highly recommend this film to anyone that enjoys the fantastic fantasy films of the late seventies and to anyone that wants to just have a good time in a world outside of their own. Check it out and keep in mind that it's all in fun.

Labels: 1975, 70's, Jack Taylor, Juan Piquer Simon, The Fabulous Journey to the Center of the Earth, Where Time Began