REVIEW: Lemora: A Child's Tale of the Supernatural

Lemora is a wickedly haunting film that plunges the audience into a fairy tale world filled with vampires, werewolves, and other unsavory creatures that thirst for young girls blood. The story of Lemora is a frightfully weird tale that seems stripped from the pages of Grimm's Fairy Tales. We follow a young girl of thirteen named Lila Lee, played by an angelical Cheryl Smith. Lila is a seemingly normal child that sings in the church choir, that is until she recieves a strange letter from a woman by the name of Lemora. The woman asks for Lila to come visit her sick father and forgive him for his past sins, seeing that he is a gangster and on the run from the law. Lila, curious about the secrecy of the letter, sets off on a journey that quickly spins out of control and takes her into the very heart of darkness. 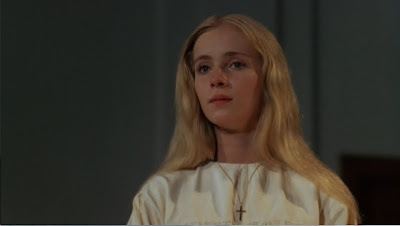 Lila before her journey to hell.
Now, before you think this is some saturday morning kids movie about little red riding hood or humpty dumpty, think again. This film is dark. Not only does it deal with some creepy monsters like vampires and werewolves, but it also touches on some sexual creepiness that tends to move into the realm of, what the f@ck is going on here? To be fare though, when dealing with vampires, you'll always tend to brush a little too closely to such taboo ideas, especially when it involves a thirteen year old girl. Thankfully, the director doesn't push the creep factor to much and just relies on the unsettling idea of vampires wanting to make Lila one of their kind.

Hey, turn that frown upside down.
The atmosphere in this film is just thick with gothic visuals and otherworldly creatures that it really is an experience to sit down and view. I've never seen anything quite as striking as what is presented here. As the story moves along and Lila journeys farther and farther away from her home, the look of the film gets darker and more foreign compared to the real world. There's an almost blueish sheen that seems to cover the lens as Lila takes a secluded bus ride through some of the most unusually disturbing forests that my eyes have ever seen. Wild creatures roam the edges of the forest, scraping their claws against the sides of the bus as it plunges through the darkness. The visuals are just top notch and there are so many scenes, like the one that I've just mentioned, that will stand out in your mind years after viewing. Watch out, these images have bite.

It's the school bus of the damned!
There is a strong sense that all that is happening on screen is something that has been pulled out of a dream. The air is filled with a hazy residue that seems to suffocate the reality from the lens and give way to a nightmarish world plagued by monstrosities at every turn. I was pulled instantly into the world that director Richard Blackburn had created, and for this reviewer there was never any going back. You get lost in the dark corners of this film, hidden under the moonlight sky as the innocent Lila struggles to come to terms with all that is happening to her. Just like you, she is lost in a dream that is steadily turning into a waking nightmare.

And they said it would be a 5 star hotel.
Not only are the visuals nightmare inducing, but the characters are equalling enthralling in their awe-inspiringly strange performances. When we are first met with the bug eyed and pale skinned Lemora, played by a monstrous Lesley Taplin, she is hypnotically starring at the audience, beckoning us to question our sanity. The manner in which she speaks is so soft spoken yet venomous as a viper, that we'd have to be dead to not be able to feel the tension in her words and the recoil of Lila as she surveys this oddball women that has requested her from afar. There is such a cloud of mystery throughout the whole film on whether these new found acquaintances are friend or foe to Lila and we never really ever gain a sense of comfort in this strange world. I've never felt such an overwhelming presence from a film before, but Blackburn and company have created something special with this film. 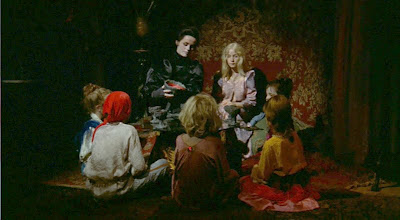 It's story time with creepy Lemora. Yippie!
The creatures that roam the forests of this world are hideous in their deformities and savage in their nature. We are presented to two separate factions of beasts, one resembling the creatures in vampire lore and the other taking strong elements from the concept of the werewolf. The werewolves are shown as blood thirsty animals that attack at random, anything that comes within their view. The vampires however, are equally as fearsome, yet have a elegant tact about them. The effects for both creatures are simple at best, but the end result is just as effective. I prefer this low budget approach to such a fantasy driven piece, especially when the atmosphere of the entire picture helps to mask much of the shortcomings when it comes to the special effects makeup. Who needs a million dollar makeup crew when you have atmosphere like this. 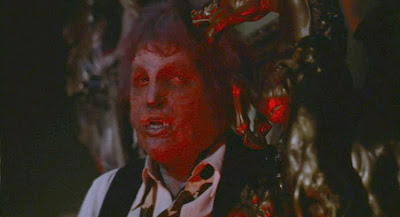 Introducing a face only a mother could love.
Another film that I can't stop comparing Lemora to is Bob Clark's Children Shouldn't Play With Dead Things. There are so many similarities between the two films that it's just impossible not to think of one when you're viewing the other. The makeup effects are strikingly similar in each and the atmosphere that both are able to achieve in each film is palpable even though they both come from such low budget origins. The overall look of each film manages to capture that pitch black notion of being lost in the middle of the woods with only a torch or lantern to light your way. Even the music shares a common thread of resonance that can't help send shivers running down your spin from the sheer primordial nature of it.

Lila the peeping tom. What a perv.
While I'm on the topic of music, you really can't get any darker then this soundtrack. The sounds are morbidly brutal and harsh to the ears as the soundtrack morphs into a series of moans and wails from the surrounding creatures of the woods. It's unsettling at best and achieves its intended result with a blood curdling shiver that is hard to shake from your mind. The combination of synthesized doom and low brooding melodies, accompanied by the cries of the creatures of the night is some of the sweetest soundscapes that I've ever heard for a horror film. This soundtrack goes down in history for being the most horror inducing experience to have ever graced my televisions speakers.

What a wonderful night to frolic in the woods.
When I mentioned that this film was dark, I wasn't just talking about the tone of the film. I was also talking about the overall look of the movie. There is so much black that encompasses the frame, that you swear that you are lost right there with Lila as she quietly tries to hide from her blood hungry attackers. I love the fact that some scenes are only lit by one single light or a string of subdued and hazy hued colors. There's just something special about the look of this film that makes it stand out and immediately brings you into the world that has been created.

Real sneaky sis.
I've been talking up all the visual and audio aesthetics of this film, but haven't gotten down to the nitty gritty of the acting. Well for a low budget obscure gem like this, the acting is pretty decent. We are given some very tense moments when Lila is making her way from rundown house to rundown house as she stealthily avoids the hordes of undead as they search for her. These moments are great and rely on the already stellar atmosphere to push these scenes along. You'll feel yourself holding your breath in some of these scenes, not realizing until our main character is clear from the danger. It's a huge accomplishment for such a little film to achieve, but it manages to overcome the shackles that many low budget films place upon themselves and in doing so, it ascends to another plain of thought. 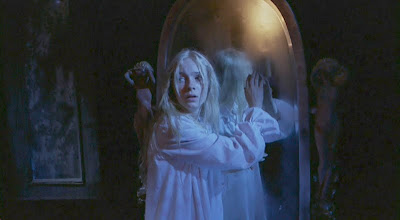 I'm talking with the girl in the mirror.
I wouldn't peg this film as having very strong dialogue or a cohesive narrative. It is more like an experience. Imagine if you had a dream as a child that scared the living bejesus out of you. You woke up to explain the whole thing to your parents, but as you go to tell them the horrible and gritty details you begin to hear yourself and you realize that it doesn't sound very scare when said aloud. Well this film is what you experience right before you wake up to tell your parents about. It can't be described, only lived. I really don't know how the filmmakers were able to achieve this little miracle, but it's the closest thing that I've ever seen that nails the feeling of being a helpless child lost in a nightmare. 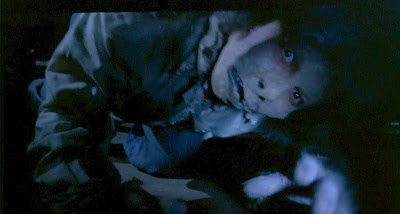 Holy shit! There really are monsters under the bed!
I can't say enough how amazing this unknown film is. The fact that it is the directors only feature film credit is astounding. He contributed to only one other project and that was to do some directorial work on the Tales From the Darkside television show. Other then that, this sadly underused director only has Lemora to his name, which isn't so bad seeing the quality of the work. I just only wish he would have made more features because I would have loved to see what he could come up with next. Still, if it means just one feature or nothing at all, I'm glad that it's Lemora that sees the light of day. The film is just astounding and should be seen by all horror fans. 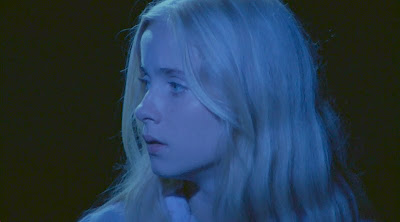 Sometimes I feel like a vampire or werewolf is watching me.
Lemora is a film that transcends the confines of the medium and reaches a place in our lives where we have felt the most vulnerable and alone. Our nightmares. It brings a fantasy tale to life and presents it in the most morbid of ways. The use of lighting, locations, sounds, and music, are so complete and intact throughout the film and at such an even level of dream-likeness, that you'd be hard pressed to find anything that remotely comes close to delivering the atmospheric quality that it so relishes in. This film is highly recommended to anyone who loves low budget horror films that ascend their shackles and for anyone that has ever gotten lost in their own dreams.